Pioneer the Possible in Paris 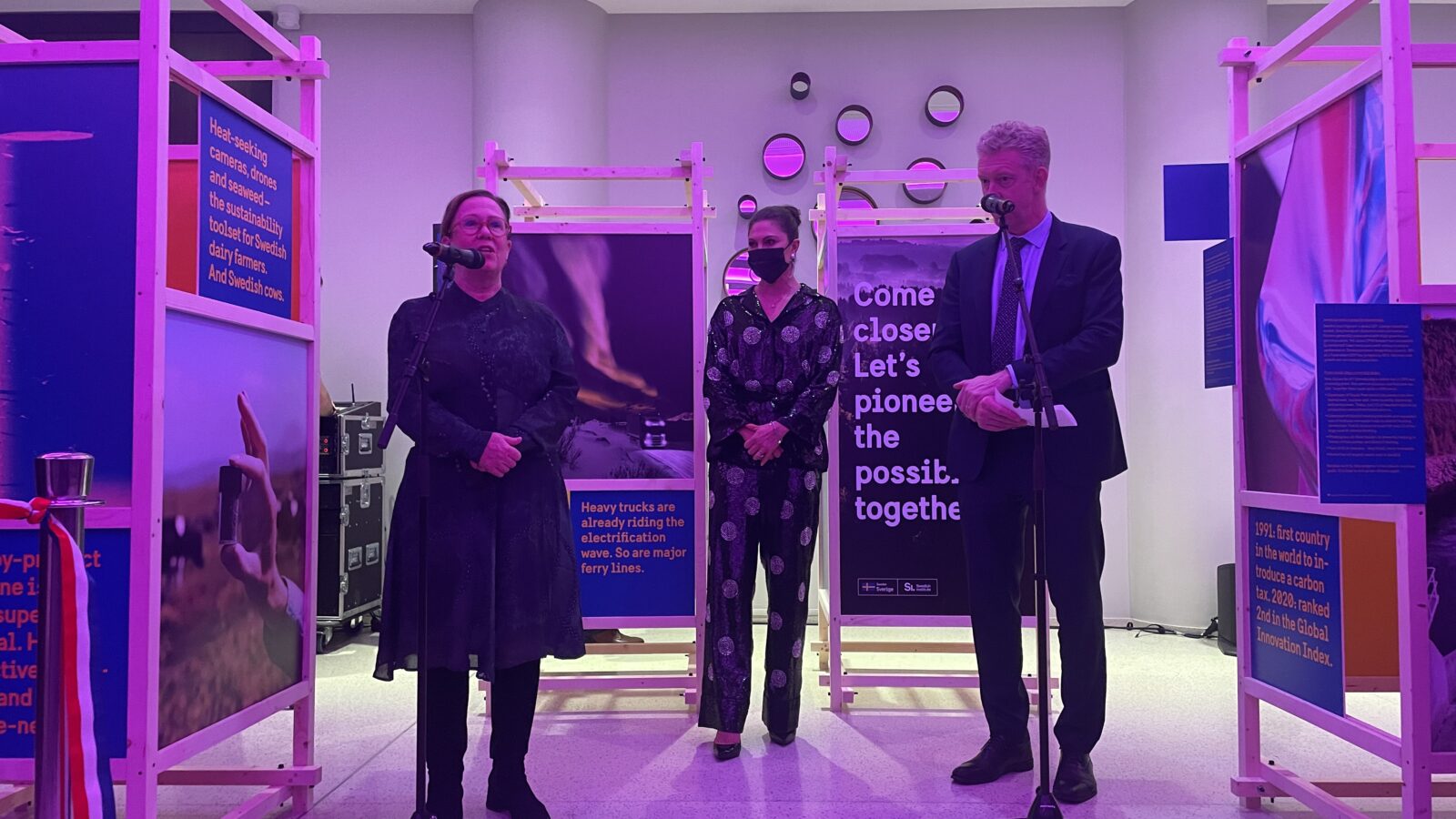 Photo: Embassy of Sweden in Paris

The Pioneer the Possible exhibition was inaugurated during the Team Sweden business summit “French-Swedish Business Day” on decarbonization of the economy in Paris on December 6 2021. The ambitious summit gathered French and Swedish business leaders, startups and decision makers in panel discussions on topics like “The economic value chain and circular economy”, “Mobility of the Future” and “Digitalisation and 5G as a platform for the green transition”. The exhibition was inaugurated by HRH The Crown Princess Victoria, State Secretary to Minister for Foreign Trade and Nordic Affairs Krister Nilsson, director general of the Swedish Institute Madeleine Sjöstedt and CEO of Business Sweden Jan Larsson. Instead of cutting a ribbon HRH The Crown Princess Victoria opened the exhibition by tying together a Swedish colored and a French colored ribbon as a symbol of the strong friendship between the two countries.   Photo: Embassy of Sweden Paris

Embassy of Sweden in Vilnius worked with the UN Sustainable Development Goals and linked the information campaign to the celebration of 100 years of Lithuanian independence in 2018. Essay competition High school students were invited to write about their visions and ideas for the future, inspired by the 17 Global Goals. The students wrote 170 essays about Lithuania, Sweden, international community and the solutions to the problems the world is facing today.  As a result, the book “#Global Goals for the future of Lithuania” was published. It included 31 best essays. The books were sent to Heads of the State, state institutions, policy makers, civil society organizations as well as Swedish Institute’s alumni network and general public. The authors of the published essays were also invited to an awards ceremony. Democracy festival Būtent! The Embassy participated in the Democracy festival Būtent!, together with Nordic Council of Ministers and Regeneration 2030. Global Goals were the main theme. The Embassy and its partners organised „Reduce, Reuse and Recover“ workshops as well as public “fikas”. SI exhibition about Agenda 2030 was an inspiration to workshops’ participants. FIKAs The embassy organised Swedish” fikas” dedicated to Global Goals at public institutions, libraries, private companies and schools. It gave many people a chance to exchange ideas about sustainability. Talking about Global Goals on social media The Embassy used its social media channels to talk about how embassy’s staff contributes to one of (or several) the goals: going to work by bike, saving water, recycling, saving electricity etc. The idea was to encourage others to live more sustainably. The campaign reached 130 000 people in Lithuania. Statistics Approximately 16 500 persons visited the Global Goals exhibition in Lithuania.

Following the successful collaboration between Kenya (the Green Teams Initiative Nairobi) and Sweden (Swedish Institute and Swedish Incubator) to run a 7 days’ challenge of sustainable living, Alumni Swedia with the support of Embassy of Sweden in Jakarta exercised the same challenge in Indonesia in May 2017. The challenge sought to combine technology and innovative drive in encouraging the development of sustainable urban lifestyles that improved the participants’ quality of life. See the film or read the project report to learn more.

In February 2017 a pilot event for Retoy was hosted by the Embassy of Sweden in Skopje, Macedonia. The project was a cooperation between the SI, the Embassy and local partners OXO and Save the Children. Many connecting activities were arranged as part of the event: Retoy toy swap event on a local pre-school Dialogue meeting with the Macedonian Ministry of Labour and Social Policy Heart-give toy activities for refugee children at the Gevgelija Transit Center together with Save the  Children A seminar and workshop on children’s rights, CSR and sustainability Meetings with Swedish companies in Macedonia about long term commitment for Retoy activities in Macedonia The project attracted a lot of media attention with Retoy founder Soledad Piñero Misa being interviewed for two TV morning show, and attracted 40 participants to the seminar and around 70 children who took part in the toy swap activities. Photos by: Ana Jakinska

On 16 May 2017 the three part exhibition Stories of Migration – then and now was inaugurated at the Occupation Museum in Tallinn, Estonia. The exhibition was a cooperation between the Embassy of Sweden in Tallinn, the Swedish Institute, International Organization for Migration (IOM) and the Museum of Occupations and featured three different exhibitions on the theme of migration: Photo exhibition Portraits of Migration by Alexander Mahmoud for the Swedish Institute.  Photo and text exhibition I am a migrant by IOM telling the stories of refugees coming to Estonia. Photo- and documentary film exhibition In the Trails Of the Boat Refugees by the Baltic Art Center showing historical photos of Baltic refugees  on the island of Gotland in the 1940s by the Swedish photographer David Holmert. The connecting documentary portraits twelve youths from the Baltic Sea region reliving the faith of some of these refugees. The exhibition attracted a lot of media attention, and during the inauguration a panel discussion on migration were held with Swedish ambassador Anders Ljunggren and photographer Alexander Mahmoud among the participants. The possibility to cooperate with other exhibitions and project on the same theme was a good way to attract partners and audience to the event. Photos by Mona Loose/SI

It’s time for us to introduce Sharing Sweden 2.0! The updated site makes it even easier for you to successfully realise your professional or academic events and presentations related to Sweden. For instance, with our improved search function you can now filter based on the type of resource you need. By clicking search you will be able to choose your topic(s) and type of resource(s) – even the type of activity you would like to arrange. Say you want a digital presentation on the topic of innovation? No problem, just go to search, select your topic and resource – and voila! New start page To make Sharing Sweden even more accessible, we have changed the design of the start page. From there, you’ll be able to find what topics are currently on the agenda and the latest additions to the site. A new section with inspirational stories is also accessible from the start page, for showing you examples of how others have used the content, or for finding tips and blog posts on the promotion of Sweden abroad – both past and present. New function – Activities We have also added the new selection criteria ‘Activities’ that include our suggestions on resources and topics in relation to a specific situation. If you need something for a seminar or event, national day, or social media campaign – Sharing Sweden will guide you to the relevant and available content. Direct link to the web shop You can still filter by language or go directly to the toolkit section. For Swedish embassies and consulates, we have added a direct link from the menu to the web shop where you can order your books, brochures and other resources produced by the Swedish Institute. You no longer have to go through a resource page to get to the web shop. Welcome to the new and improved Sharing Sweden!