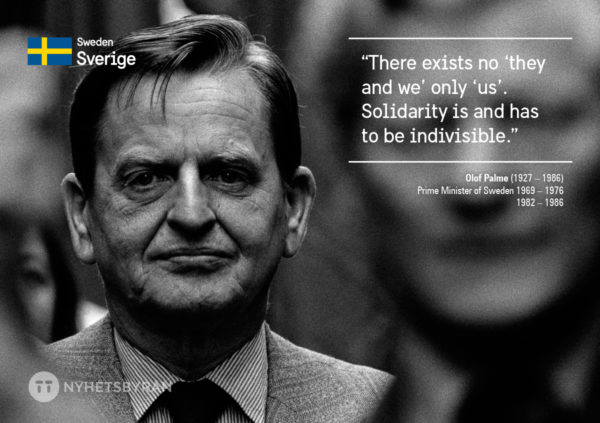 This item is also available in: Spanish
Social media content

Olof Palme (1927-1986) was two-term Prime Minister of Sweden, and arguably Sweden’s internationally most renowned politician of all times.

As a notoriously outspoken human rights advocate, he lifted issues of equality, the right of national self-determination and the fight against racism to the fore of Swedish foreign policy. A staunch critic of imperialist political agendas and authoritarian regimes, Palme was an early critic of apartheid during the 1970s – far from obvious for a politician at the time.

To remember his legacy, we have created five images with famous Olof Palme quotes, all focusing on the issues of democracy and human rights. The quotes have been selected in cooperation with The Olof Palme International Center.

This item is also available in: Spanish

Sweden.se is an official source for facts about Sweden.

Stories from Sweden – Aiming for the stars – Trailer

Four of Sweden’s most innovative choreographers travel to Ingmar Bergman’s home on Fårö to explore and get inspired. The result…