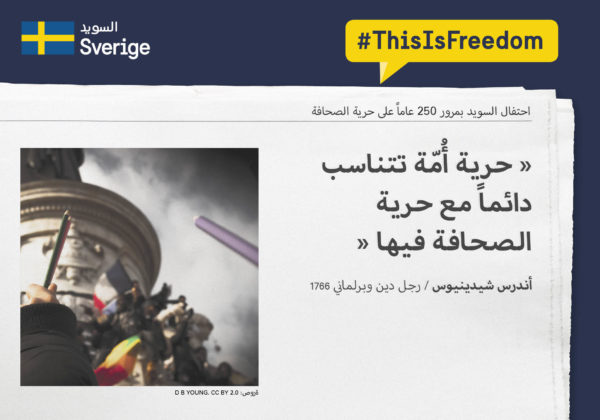 This item is also available in: Russian and English
Social media content

Designed to commemorate the 250th anniversary of the first Freedom of the Press Act in the world, and at the same time addressing today’s need to defend the very same freedoms, the #ThisIsFreedom quotes provides Swedish Foreign Missions with a selection of easy-to-use quotes from the Swedish freedom of the press history for sharing in social media like Twitter. Spanning from pioneers such as Peter Forsskål (1732-63) and Anders Chydenius (1729-1803) to world known writers August Strindberg (1849-1912) and Astrid Lindgren (1907-2002), the tweets are equally suited for promotional use as they are for public debate.

When sharing the quotes in social media, please tag #ThisIsFreedom.

As of 3 May, World Freedom of the Press Day, the tweets may be used freely, or on either of below dates throughout 2016

This item is also available in: Russian and English

How Swedish women got the right to vote (Arabic)

In 2021 Sweden celebrates 100 years since Swedish women got the right to vote. To mark this anniversary, here’s a…

Swedish democracy starts with the people, who elect representatives to parliament. And the king is not in charge of the…

Armed only with his bravery and moral courage, Raoul Wallenberg saved tens of thousands of Jews from the Holocaust. It’s…

Sweden is a free and open society. Its people have the right to take part in demonstrations, freedom of speech,…