This toolkit pays tribute to women that have contributed to making the film industry a more gender-equal place. Gender equality is not only a human right, it is also the United Nations’ fifth goal of the 2030 Agenda for Sustainable Development. When it comes to gender equality in film, there is still plenty of room for improvement. Hence, the Swedish Film Institute together with the Swedish Minister of Culture announced their 50/50 by 2020 initiative at the Cannes Film Festival in 2016. The concept is now widely used by the international film industry.

The timeline Pioneering women in film tells the history of women in film, from its very beginnings until today. It can be displayed at film festivals worldwide, and when needed it can be expanded with local examples. Several Swedish contemporary films by female directors are provided via the Swedish Institute’s film selection. The Swedish Film Institute also provides key films by Swedish women from different eras, with directors such as Karin Swanström, Mai Zetterling, Suzanne Osten and Marie-Louise Ekman. We strongly recommend workshops, talks and seminars with film practitioners, scolars and activists as a complement to these building blocks. 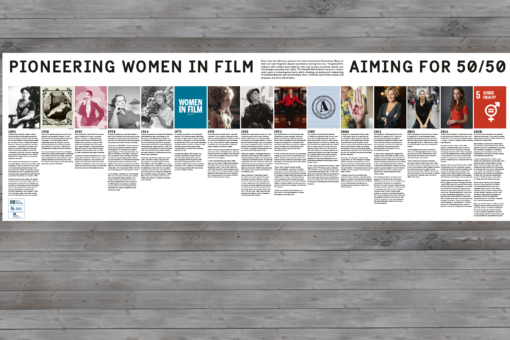 The timeline is available as a wall banner or a leaflet. Both are in English, but can be translated and printed in local languages. The banner measures 4,0 x 2,3 m. The fabric depends on where and how it is showcased – indoor, outdoor etc. – but in general we suggest polyester. High resolution print files are available upon request.

Text in Word for translation

The Swedish Film Institute provides films from the National film archive with leading women directors, such as Gunnel Lindblom and Marie-Louise Ekman. The films are in DCP format with English subtitles and the screening fee is 1800 SEK (apx 170 EUR) for 1-2 screenings plus transport. Please contact Kajsa Hedström at Kajsa.hedstrom@sfi.se for further information.

The application must be sent in at least two months before the event. Resources are limited, and financial support may not be available at the end of the year. Limits may apply.

By filling out the application form you agree to respect the copyright agreement for the images.